THIS is the 8th car in the series.

Note: Sequentially, we are back on track again as far as the number order goes
(for now, more number changes occurred later!).
{the GNX Xray car, issue #8101, threw us off track due to the date release order we are printing these based on}

The outer white box would drop the term ‘Peachstate Collectibles” that they’d been printing on it since part #8004, and was now replaced with the GMP logo (a diamond shaped box with their logo & Georgia Marketing Promotions nameplate inside, surrounded by two checkered flags on the outside).
The “www.peachgmp.com” website would return being printed on the bottom of the outer box (temporarily).

For the first time ever, the inner box would have a silver foil stamped GMP logo on the bottom left corner on the face of the box.

The lithograph box is stamped in red ink with Epitome’s logo.
The car number is hand written on it using a red marker.
The same style was on the envelope that the mini window sticker came in.
Buddy Ingersoll signed the 300 created lithos using a silver marker.

This is the very first model to come with a Certificate of Authenticity, stating:
Congratulations! You have received 1985 Buick Grand National # ____ . This car is one of only 300 produced with this certificate and gold license plate for the Epitome Exclusives Buick 300 Gold Club.
{Then, the gold license plate was actually attached TO this certificate! (not “ON” the car!) }
Georgia Marketing & Promotions Co., Inc. 2001
.
A ghost image of the Turbo 6 logo is in the background of this cert.
The car number is stamped on using red ink.

This was the first issue that was suppose to have the special “gold” license plate ON the car, but for whatever reason, they didn’t do it like that. (according to the enclosed letter with this model, there was some type of error from the factory, so the license plates weren’t attached at the time of manufacture, so later when they received them, they simply attached them to the COA, but could optionally be removed & placed onto the car by the purchaser).
.
So because of this, this model would revert back to the old system of stating the year/name of car on the license plate!

The new special gold license plates were printed in this manner:  # 32  (whereas near then end of this series, they started printing the number zeros in front of the numbers, to fill a 4-digit space!)

Epitome included a letter with this model, some of which is stated above. The rest of it mentioned that some of the window stickers were damaged & buyers would either be receiving a replacement, or could request one if needed.
{the way that EE sent some of these out: if you look at tomorrow’s post for the WH1 (#8008), in the pictures, you will see a sticker that was placed on the window sticker envelope for that car (the WH1), that noted that a new window sticker for THIS model (the 85 GN) was enclosed there (inside the WH-1 envelope), as a replacement for the one that was originally included for the diecast car shown on THIS page}.
.
Also mentioned within was a reminder about ordering the Commemorative Buick Grand National 1:64 scale transporter!

On a side note: the above letter was dated 11/13/2001. But yet, the release dates that I have {which are the official release dates} – (which are listed in the info block at the top of this & every page for these diecast cars), states that the release date for this car was 6/2001. Meaning, the cars didn’t actually reached buyers until at least 5 months AFTER the release date! Just something to keep in mind if there’s a question about “when” these cars actually came out (or were released / available / etc.) ! 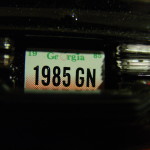 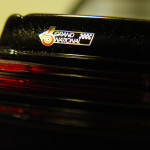 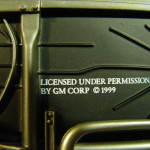 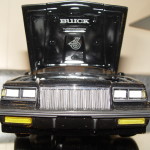 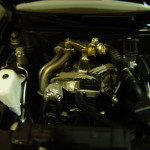 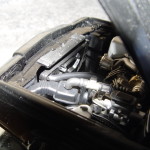 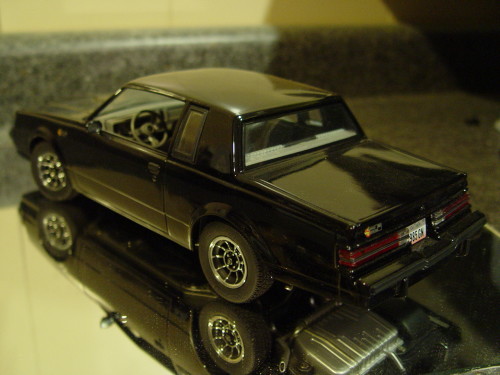 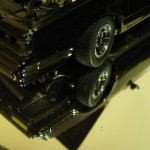 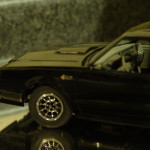 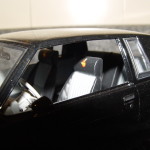 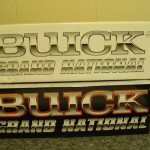 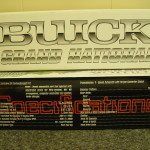 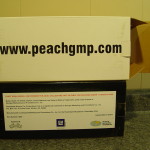 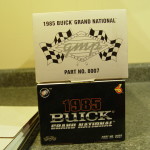 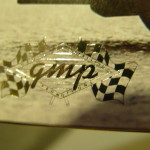 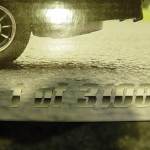 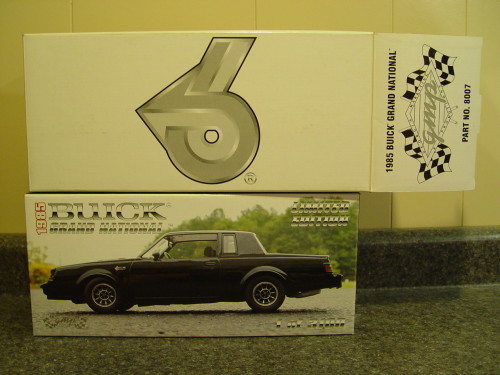 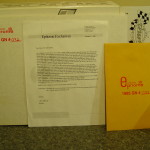 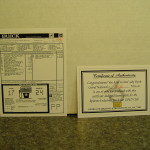 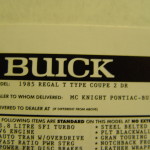 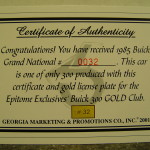 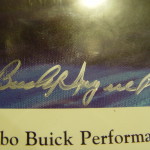 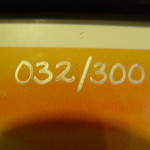 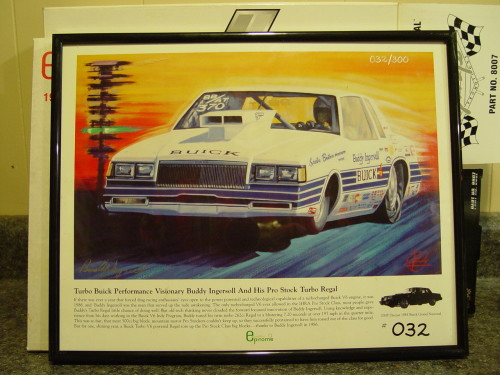 If there was ever a year that forced drag racing enthusiasts’ eyes open to the power potential and technological capabilities of a turbocharged Buick V6 engine, it was 1986, and Buddy Ingersoll was the man that served up the rude awakening. The only turbocharged V6 ever allowed in the IHRA Pro Stock Class, most people gave Buddy’s Turbo Regal little chance of doing well. But old tech thinking never clouded the forward focused innovation of Buddy Ingersoll. Using knowledge and experience, from his days working in the Buick V6 Indy Program, Buddy tuned his twin turbo 262ci Regal to a blistering 7.20 seconds at over 197 mph in the quarter mile. This was so fast, that most 500ci big block, mountain motor Pro Stockers couldn’t keep up, so they successfully petitioned to have him tossed out of the class for good. But for one, shining year, a Buick Turbo V6 powered Regal tore up the Pro Stock Class big blocks…… thanks to Buddy Ingersoll in 1986.

NEXT car in the series: 1983 Molly prototype.
Be SURE to check back tomorrow to see it!

The 8th model of the Turbo Buick Series GMP produced was a 1985 Grand National. The subject I chose for this lithograph was Buddy Ingersoll and his legendary Pro Stock Turbo Regal that he campaigned in 1986. You can zoom in on the lithograph and see what I wrote about it 20 years ago.

Buddy, unfortunately, is no longer with us. I have a few stories to tell about the time I spent with him in his shop so he could sign the 300 lithographs. 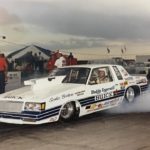 Firstly, Buddy was the nicest, most normal person for being the racing and chassis genius he was.

Not one bit of conceit in him.

I sat in his shop with him for hours and he pulled out scrap book after scrap book with pictures and what seemed like 100 NHRA and IHRA record holding certificates from all his years. 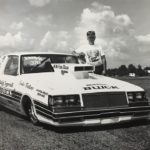 He told me so many race stories and eventually pulled the three 8”x10” personal pictures out of one of his scrap books and gave them to me.
(shown to the right, and below)

He appreciated that his history was being shared. I have never posted or shared these with anyone.

I have no idea if any of them are already public. 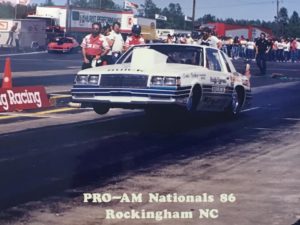 So what did he tell me about his car? One thing he told me was that the fuel injection was MECHANICAL, not computer controlled. To get the tune right, he had to hit it, take all kinds of readings, make adjustments and then hit it again. Remember, he ran 7.20 @ 197mph in a Regal body in 1986. He was amazing.

Where did this car come from?
His good friend and drag racing legend Warren Johnson.

This car originated as Warren’s 1983 Oldsmobile Cutlass. Then a couple of short years later Buddy got it and changed it over to a Buick Regal, something that was very easy to do.

Where is the car now? When I spoke to Buddy about this, he said he wasn’t sure anymore, but you’ll be surprised where the complete driveline went. He said some guys from New York City came all the way out to his shop in Ziegler, Illinois and bought it from him to street race with back in New York City! He laughed about it and said he didn’t know how they made out.

After Buddy was booted from the Pro Stocks in 1986, he went to work for Warren Johnson as his main chassis man (I don’t know the timeline on this). I recently spoke to Warren to see if he might know what happened to the car, but he does not.

Please watch the following video, just to see how shocked the big block Pro Stockers were at just how fast “the turbo” of Buddy Ingersoll was. RIP Buddy, you are a Turbo Buick legend!