For the most part, it’s not hard to take pictures of cars.
Of course, just because it’s easy, that doesn’t mean the photos are going to be any good, either.
What makes a good pic?
What draws you in on the photo that makes you REALLY like it?
Does the picture speak to you? Is it captivating?

When you’re trying to get specific shots, well-planned with a good lay out included, certain angles, framing, detailed things you want (& not want) incorporated into the shot, well, that’s sometimes the challenging part when you are doing Buick photography.

Sometimes you get lucky. Most times you don’t.
I’ve personally taken thousands (& thousands & thousands) of photos of cars.
Occasionally the coolest photos just happen, without much effort.
(and sometimes you get shots with cool effects / stuff in them that you didn’t even notice while you were taking them!)

Other times, you need to take A LOT of pictures, and attempt to acquire what you are visualizing.
If you take enough shots of the same thing (same car, moving ever so slightly to get that “right” look you are trying to accomplish), most of the time you can achieve success for your efforts.

Of course, it might take 100 shots to get just a single GREAT photo.
But’s that’s ok, especially now that we are living in the digital age!
Just shoot away & delete what you don’t need.
Today’s “pictures” don’t cost any money like back in the days of 35mm & larger format stuff. You don’t have to print them all, then choose which one is acceptable (& “hope” that ONE actually will be!).
You can just review them all on your monitor & select.
They DO cost you your time though, as far as the planning stages & multiple picture taking goes, not to mention going thru them all to pick out the best one.

[and if all else fails, well, there’s always photoshop to rescue you]

Mostly, it’s learning process (like everything else).
If you shoot enough, or study what you’ve done in the past, you’ll figure out what’s good, and what’s not.
You’ll start to truly appreciate the “art” you are creating.
(instead of just the scrapbook filled with tons of “pictures” you have)

The first few below are some of my attempts to get (what my friend calls) “ooh fancy” and “ooh creative” from this years event.
They were shot in/around Beech Bend Raceway during the 2015 Buick GS Nationals in Bowling Green Kentucky.

The first shot (GN with roller coaster in background):
I purposely lined up the roller coaster with the edge of the car.
I LOVE the way the grass in the foreground leads your eye up to the car (good framing).
About a dozen shots were taken of this subject; with varying heights of the sky & the grass, as well as varying lengths of the car.
The more grass (in the shot) won out over more sky.
Adding the full length of the car just didn’t look right either in this shot.
All in all, thumbs up for this pic.

[and BTW, this really wasn’t a planned shot. I was headed back towards our rental car when I walked by & saw this subject matter, just waiting there for me to snap away. Good thing I’m always “aware” of my surroundings & always looking for something cool to photograph! & it helps to get “lucky” sometimes & just run into photo-worthy opportunities!] 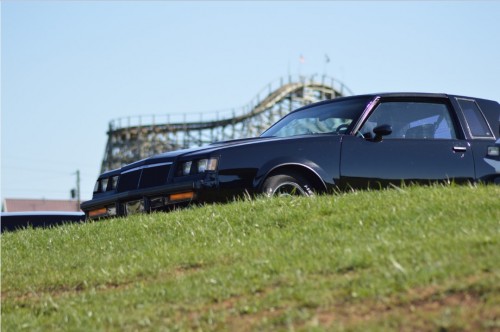 This next one is the entrance to Beech Bend Raceway.
I like all the open space & the pavement on the right.
(makes your mind think where does this lead to?).
It helps that as your eyes are lead up the road (from the bottom), right to the very edge of the (visual) pavement, you then naturally (follow the line &) look to the left, where the Buick Grand National is awaiting it’s turn to go inside the track.
Nothing too special, but kind of a neat pic. 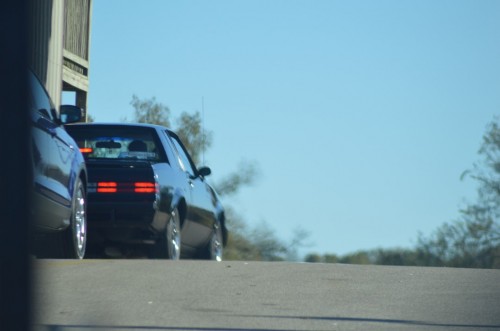 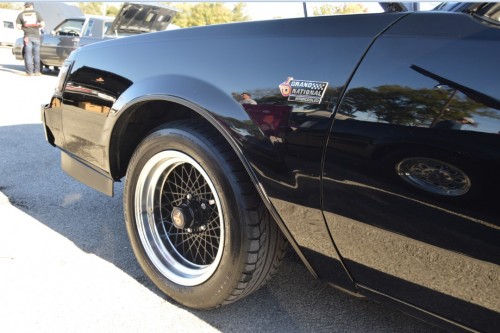 Sometimes photos not just look neat, but they convey a story as well.
By looking at the below picture, you know exactly where this Buick Grand National is, and where it is headed. If you don’t, all you need do is notice the directional street sign.
(Those who have been down in Bowling Green Kentucky will immediately recognize this as the beginning of the long twisty road that leads up to the park entrance). 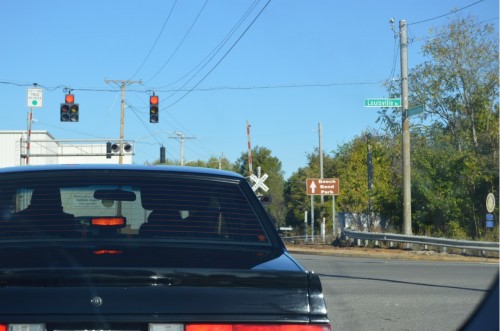 So, inspiring automobile photographers, there ya go, a few tips for better & more interesting pics.
Now go, get inspired, photograph away & share your creative visions…