THIS is the 20th car in the series.

This is issue #2 from this 3 car mini series, produced by Epitome Exclusives (but manufactured thru {GMP} Georgia Marketing & Promotions).

Epitome Exclusives asked Molly Sanders to design a car for the specific purpose of including it within this set. Here is the Gbody Regal he came up with!
(and what an awesome inspiration, don’t you agree?)

The front license plate has the Molly Designs logo on it.

There’s a turbo 6 logo on the rear quarter panel, reminiscent of the 1981 Indy car / 1982 Grand National Regal (“BUICK” nameplate) styling placement.
(this power 6 logo also looks like the same one from the front fender of the 81 pace car as well, which is a distinct possibility since Molly was involved with Buick merchandising for that event / time period).

With black on top & silver at the bottom, being divided by orange & yellow pinstriping in the middle, this (similar to) WH1 type of custom paint looks incredible on this vehicle!

The rims are chrome plated versions of the same ones found on the Molly prototype car (#8009).

This 1:18 scale model has the interior from the regular stock GN’s, but utilizes the engine found in any of the “drag” type buicks featured in this series.

A brand new detail to the TB series cars, for the first time ever shown, would be a Delco sticker on the battery!
(previous to this issue, the batteries were plain black – and would go back to that style right after this release!)

There are also other NEW decals (again, first time implemented) for the A/C unit, on the radiator hold down, and fan belt placement sticker on the core support!

The detailing on the GMP vehicles was always pretty good (for a scale car), but it was nice to see that they were evolving even more!

THAT, is only 1 of 2 curiosities about THIS car, as well as the last 2 t-types produced…
Check out this one as well:

THIS car would be only 1 of 3 EVER to have orange colored front bumper lights!
(ALL of the rest of the cars in the entire Turbo Buick series would have yellow colored turn signals!)
{#G1800224 & #G1800225 (the last 2 t-types; same links as above) would be the 2 other models}

The inner box features a graphicly designed pattern of overlaying “turbo 6” symbols.
(and of course Molly incorporated this logo to be used on this model, since he was the one who originally designed both this car AND the logo! SEE: turbo 6 logo)

There’s no GMP part number shown anywhere on the (inner or outer) boxes, but rest assured, the proper # for this diecast model buick is: G1800212.

Thru the EE Buick 300 Gold Club, the first 300 cars issued have numbered certificates (COA) signed by Molly. (The car shown below is not one of these, as indicated by the silver colored license plates). 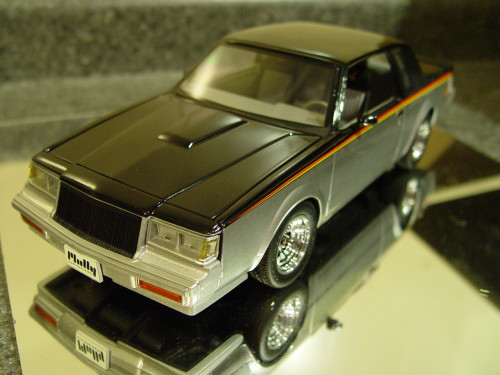 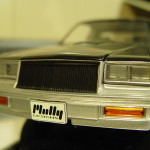 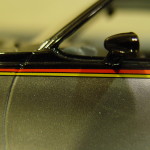 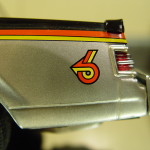 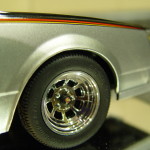 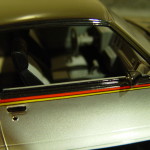 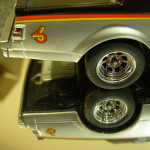 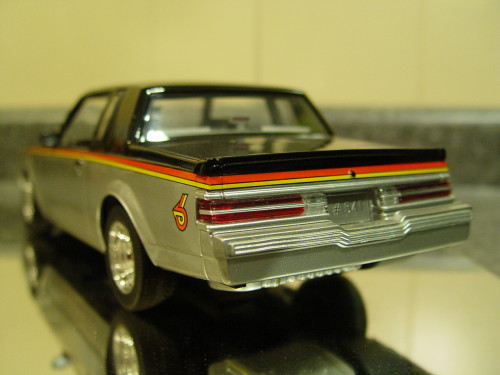 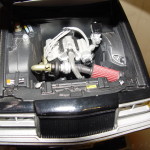 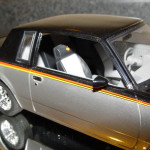 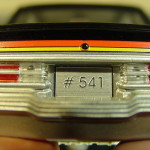 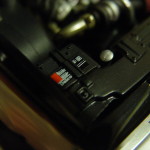 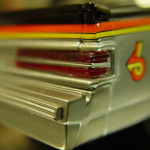 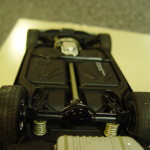 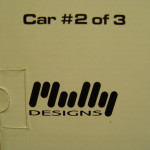 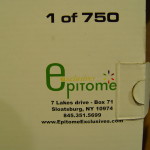 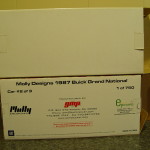 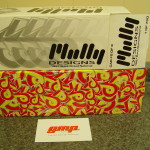 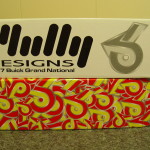 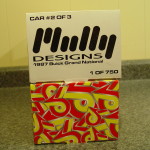