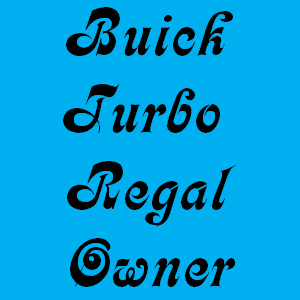 These should put a smile on your face, or at least make you chuckle!

A big Thanks to the great members of turbobuick.com who contributed all these!

.
You Know You Drive A Buick Turbo Regal When:

> you start the engine and a smile cannot be held back

> your clocked doing a burn-out at 60 mph

> no one wants to race you anymore

> you let off the gas pedal and people think your car broke when they hear the horse sneeze!

> there are some sort of Buick parts in the garage, basement and bedroom

> the car spends more time with the hood open than closed

> you spend more time fixing it than driving it

> you are constantly telling people “it’s not a Monte Carlo”

> you refer to other muscles cars as “Junk”

> you stay stuck on Turbobuick.com trying to figure out why you have knock

> when the cops pull you over and don’t know what kind of car it is (no it’s not a monte carlo, officer)

> you try to get the UPS delivery before your wife does, so she doesn’t see what you bought

> when every goober at the local car show has to tell you about how cousin Cletus had one just like it “back in the day”, but his had a three-fiddy with a four-barrow & glasspacks

> your trunk is full of spare parts… just in case

> your girlfriend / wife tells you that she hates your car

> when you tell people “I have two books at my bedside, sir, the GN Facts and Figures Book and the King James Bible. The only proper authorities I am aware of are Stephen Dove, Dennis Kirban and the Lord our God.”

> when you think meth (alky) dealers are good people

> When people only recognize the back of your car!

> You actually try to get caught at a red light, so you can be the first to leave it…
& then hope a motorcycle comes up between the cars so you’ll have something fair to race!

> when you’re always asked… you wanna sell it?

> when you drive around with a helmet in your car

Hope you enjoyed these.

Search our other posts for more funny comments & stories!