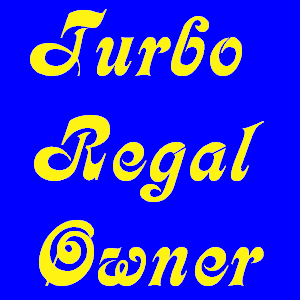 These should put a smile on your face, or at least make you chuckle!

A big Thanks to the great members of turbobuick.com who contributed all these!

.
You Know You Drive A Turbo Regal When…

* the mechanic inspecting it sees the dump pipe, shakes his head, and slaps the sticker on it anyway

* your neighbor compares the black paint to that of an orange

* race prepping your car means turning off the a/c

* you have a “Big is Beautiful” license plate holder

* you have safety harnesses instead of seat belts for five occupants

* your race car has never been on a trailer

* you think anything less than a 455 is a small block

* you won’t race motorcycles because it isn’t fair… to them!

* You painted your riding lawnmower black and turbocharged it

* The wrecker service calls you when they get their rigs stuck

* You have heard the phrase “That’s a Buick!?” from more than 5 punk kids in Daddy’s ‘Vette after you shut them down

* You have sucked so many bumpers off other cars, your car is nicknamed “The Hoover”

* Your car has more towing capacity than a one ton dually

* You think every four door should have a cam, headers and slicks and runs 12s

* You’ve never seen the tail lights of a Mustang GT

Hope you enjoyed these.

Search our other posts for more funny comments & stories!