In the last 2 years or so, Maisto has definitely taken over the diecast market in terms of the number of Buick Regal themed vehicles released, compared to other scale car makers.
There’s been at least 6 different variations packaged up with assorted designs.

This newest one, a 1:64 scale Ramp Truck with 1987 Buick Grand National, from the Elite Transport series from Maisto Design, features a black Buick Grand National with red pinstriping and brand new 5-star rims with mean aggressive looking tires on it!
The words “grind time” are on the quarter panels incorporated into the pinstripe (on the car as well as the truck).

This is the second transporter truck design that Maisto has produced.
(the Missile Tow Flatbed Buick Regal T type was the first)

If you’re into other Buicks, Maisto has produced several other vehicles besides the Regal, such as a 1965 Riviera, 1955 Century, 2000 Rendezvous, some concept cars, etc., in a few different scales too, other than 1:64.

It’s a very nice looking setup and would be a great addition to your Buick diecast collection!
Available for less than 20 bucks (ebay, shipped). 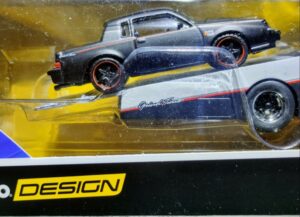 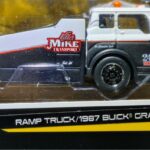